Control and automation engineering is becoming increasingly important in the era of digitalisation. Kampmann keep pace with the times.

Air moves. Or it doesn’t. And electricity? 1 = the current is flowing. 0 = the current is not flowing. That is what the ventilation industry fundamentally deals with: we move air. And in order to achieve that, we have to accelerate it by way of electrically operated fans. Electric current and air – two really abstract elements. Invisible. Odourless. Yet, whilst air always has a consistent and comparably easy to control nature, it is more complicated with electricity. Or to be more precise, not with the current itself but with what can be done with it and how. For that is becoming increasingly complex, more intricate. More and more intricate. But also better – at the user’s advantage. To be precise: advancing digitalisation and networking enables users to control any kind of technical units centrally, using a smartphone for example – at least in theory. Undoubtful is that fact that what we call “SmartHome” or the “Internet of Things” privately and “Industry 4.0” in the commercial world is the future.

Even in the HVAC industry. If we think of Kampmann, the first thing we visualise is units. Most likely trench heating. Or a fan coil. Maybe even a radiant ceiling panel. Only few of us think of control and feedback control technology – why should we? It doesn’t become really visible anyway. Having said that, each Kampmann unit, having been optimised for performance and efficiency, is not worth much without intelligent controlling. The same as with any other controllable unit.

Process measuring and control technology is thus a specialist field that makes up an important part of the success of Kampmann and which, with regard to digitalisation, is massively required to maintain the company’s future viability. A challenge, which Arend Brink (head of product management control and automation at Kampmann) is glad to accept with his team.

When Arend Brink joined Kampmann 24 years ago, he was a “one-man-show” – the first, and for a while, only employee in the “Control” department. No trace of digitalisation and networking yet. Instead of that there was the analogous control system Venkatronic, a simple and robust unit that endured for quite a long time until the requirements of the market asked for new, digital solutions. Consequently, Arend Brink and his growing team developed the “KaBus”, a fieldbus system on the basis of RS485 communication, which was already 100% parameterizable in 1997. With it, secondary, mixed and extracted air units could all be jointly operated in up to eight zones. This made the KaBus an extremely advanced unit of its time.

THE PRODUCT MANUFACTURER HAS IT ALL UNDER CONTROL

Yet, the setting in of the digital era with its rapidly growing possibilities, especially that of data exchange, facilitates a much more extensive type of integration. Open systems are in demand, which enable an interdisciplinary exchange between trades. Whilst open process measuring and control standards such as BACnet, Modbus and KNX are widespread in the HVAC industry, the industry does sometimes find it difficult to keep up with development. Far too frequently the subject of control and integration is neglected. However, the digital transformation is inevitably the future. And it is better for all involved, from the planner to the room user, if the controlling originates from the manufacturer of the device.

"The possibility of integrating trades of the HVAC industry in open systems of the building control system is not only an obligatory challenge but also an opportunity.”

It is obvious: every household device, from a coffee maker to a washing machine, has a control unit integrated by the manufacturer. And that is the way it should be with climate control units. After all, the manufacturers are by nature intent on providing high-quality, accurately sized control units, whereas third-party components are easily oversized. Moreover, the exact interface definition of a manufacturer’s control unit alleviates the integration in a holistic automation concept. Kampmann creates these requirements with KaControl and thus offers the complete integration in open building management systems. And a clearly defined interface also ensures a clear separation of the responsibility between the manufacturer of the unit and the building automator. How this works out in real life is best explained using the hotel example.

A hotel has many rooms. And not so seldom, all rooms are occupied. Yet this does not mean that the guest is there around the clock. Certainly not – because usually, he is out and about during the day, relaxing in the wellness area or sitting in the restaurant. It is only at night when he is most probably in the room. It thus makes no sense to keep all rooms at 21 degree Celsius, for example, all the time, especially because many guests prefer a cooler climate at night. However, not air-conditioning the room is not a solution either. A task for building automation.

Making use of the current technical possibilities, the solution could look as follows: the entire building is controlled centrally from reception. All “responsive” systems of the hotel are united in the building automation via the KNX standard, for example – multimedia, lighting, windows, Wi-Fi, master key system and so on, including, of course, the air conditioning. If a room is not occupied, it is kept in an energy-saving pre-comfort mode. When the guest arrives, the room can either be “activated” directly at reception or the guest signalises his presence when opening the room with his key card. The room goes into comfort mode. This means that the air conditioning only has to regulate the temperature a little bit until it has become cosy. And thanks to the EC technology that is installed, for example, in Kampmann’s Venkon fan coils, the speed can be limited and the unit operated at the middle setting at maximum. This way, the temperature is pleasant when the guest arrives and is quickly at the desired temperature – and that with minimal sound emissions. Of course, the guest can custom-control his ideal climate by using the room control unit such as the KaController.

PLAN THE INTEGRATION OF HOLISTIC CONTROL SYSTEMS AT AN EARLY STAGE

If the guest was to open the window instead, because it is too warm for him, the control unit signalises to the heating to lower its temperature. Many a guest prefers it cooler, especially at night. An intelligent control system can makes sure that, in this case, the cold night air from outside is supplied. Umpteen other causal correlations between different systems can be controlled in favour of greater energy efficiency and greater comfort this way. All of this is already feasible. All you need to do is consider the intelligence responsible for this as early as possible, that is: the ability to integrate KNX for all HAVC systems must be given in as early as the planning phase. And all units must function harmoniously with each other, that is: speak KNX. True: the effort in the first step is huge, but the development of the market is clearly and irrevocably pointing in this direction. 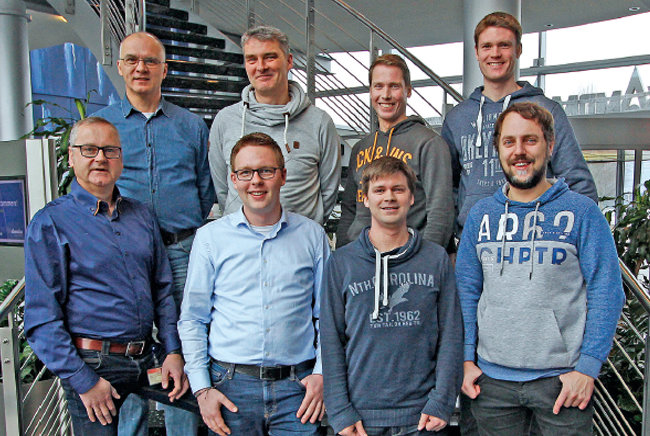 These guys have it all under control: the team performs multifaceted tasks. They are represented in product development teams and take care of the observation of laws and standards in relation to process measuring and control technology. They support the sales department and are always available as problem solvers and special solution finders. In addition, they train in the scope of the campus both employees and outsiders. And it goes without saying that they develop and programme control technology for all units of the entire Kampmann Group. (Klaus Möller and Heinz Timmreck are missing in the photo)

Complex air conditioning systems such as the HYBRID ECO System by Kampmann, where centralised and decentralised units work together, are sensitive constructs. For the optimal interplay of these components, Kampmann as the problem solver offers customers a system solution as an all-in-one solution. The AUL-Tableau, in combination with in-situ support by Kampmann system engineers, rounds off the package. A further relevant aspect of the networking relates to maintenance and optimisation.

In order to operate a system as close to the optimum as possible, the analysis and readjustment of the transferred data is a must. In the event of malfunctions or particularly striking system data, the control unit can “inform” the corresponding administrator, be it the facility manager, be it customer service, directly, so that there can be a fast intervention. Even in this case, the defined Kampmann interfaces organise the data exchange to the monitoring system.

This makes it possible to integrate maintenance groups of the HVAC industry in open systems of building management services to be not only an obligatory challenge but also an opportunity. Not only is Kampmann up-to-date with its process measuring and control technology but also equipped for a digital future that makes air conditioning systems controllable via smartphones.