Trend researcher Dr. Wallner defined in conversation with KAMPMANN HEUTE terminology including "Industry 4.0", "Digital Transformation" and explains how we get there.

Dr. Wallner, the term "digitalisation" is everywhere – everyone knows it. But people have greater difficulty defining it. And when it comes to introducing this process into companies, that is implementing digital transformation, then many are quite overwhelmed. You are a trend researcher on this topic and advise companies on the digital revolution and Industry 4.0. Could you shed a little light on the matter?

I will try my best!

Let’s start with a simple question: How would you define digitalisation in a nutshell?

Digitalisation is a profound process of transformation of our life and the world of work triggered and accelerated by disruptive technologies, but not solely understood from a technological perspective. There will also be a change of social values through digitalisation. Digitalisation technologies include data evaluation, the linking of smart devices or process automation by artificially intelligent systems. And although the word is becoming more common, digitalisation is no longer just about the conversion of analogue to digital formats, but individual products, personal approaches and problem-solving.

And what do you understand by the term "Industry 4.0"?

Industry 4.0 describes the combination of traditional industrial production with data and the disruptive technologies of digitalisation. Linking machines to an "Internet of Things” leads to novel production, maintenance and communication processes. Data is collected by sensors at every point in this network, which is analysed in big data analysis and used to optimise the entire value chain. Large parts can be automated and decisions made directly by the systems through the increased use of robots in production in conjunction with artificially intelligent systems. For example, machines can report signs of wear and tear before this results in a production failure.

“Customers’ current understanding and the competitive advantage through experience is misjudged and new technologies are prematurely rejected."

One has the feeling that many companies, especially small and medium-sized enterprises, are still in the process of understanding what is going on, rather than actively participating in the process. Why do the companies struggle so much with digital transformation?

In my opinion, several factors play a role: on the one hand, we are currently still in a very positive economic situation – for many companies, there is simply no need to change their business model. This is a short-term perspective, which will suffer at the very latest when success plateaus and the finance is no longer available for a – quite cost-intensive – digital change. On the other hand, many companies do not know where to start with digital transformation. The wide-ranging options and a lack of knowledge, expertise and money in the respective departments then lead to a kind of paralysis in which no decisions are made rather than the wrong ones. There is also a lack of clarity in many companies about the benefits of a data-driven business model. Customers’ current understanding and the competitive advantage through experience is misjudged and new technologies are prematurely rejected. 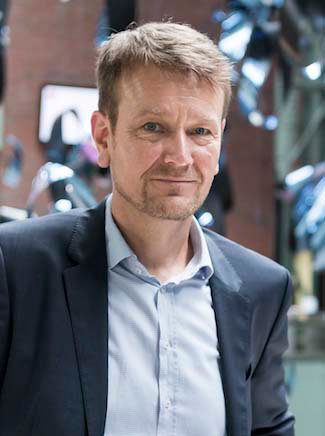 Dr. Jörg Wallner is Director of Innovation and Change at 2b AHEAD ThinkTank. The trend researcher is an expert on topics, such as Industry 4.0, mobility of the future and digital transformation. Wallner is a doctoral political scientist, sociologist and journalist, an experienced consultant and sought-after keynote speaker.

Some people may perhaps be thinking that “there’s still plenty of time” and so, in a way, are dozing through the change. How bad could it be?

The consequences can be very different depending on the industry. In some markets, digitalisation occurred much later and pretty much all competitors were still in analogue hibernation so that the company might get a second chance. However, there is a very high probability that there will be no way to avoid digital change. In most cases, the competition is not standing still, and as soon as at least one company has secured all the efficiency benefits of digitalisation then it becomes the new industry standard. As this company has already created a basis on which it can more easily implement new projects, it becomes much more difficult for all other competitors to keep up with this pace of development or even exceed it. If a company fails in this and does not stand out in other ways in the eyes of the customers, it will most likely be squeezed out of the market.

Imagine a company that has always been “analogue” up to now. Its boss now says: "Digitalisation – we need to do that!” But nobody knows how and where to start. What advice do you have for the company?

First, they should consider developing a digital strategy to think through short and long-term projects and relate them to each other. Without proper planning, there is a danger that individual digital initiatives are not begun or completed or run dry after implementation as the targets and objectives have not been clearly defined. Thereafter, initially small projects should be started within the framework of this digital strategy to achieve rapid success and initially convince sceptical employees. In general, the integration of employees into the digitisation process is at least as important as the implementation of the process itself, as it is impossible to have successful change with their resistance – a change embodied by staff is so much more effective.

“The integration of employees into the digitisation process is at least as important as the implementation of the process itself.”

Companies that are already pro-digital, such as in e-commerce, will find the change much easier. It will be much harder in the manufacturing industry. How digital can a metal processing company be?

In every industry there is a certain potential for optimisation through digital change, but of course the starting points fundamentally differ. While retail companies require very little technical equipment and the focus is often on efficient, digitally linked supply chains, the machinery in the manufacturing industry represent a large proportion of its assets. However, each of these machines simultaneously offers the potential to collect data using sensors and evaluate it summarised in big data analysis. This provides the opportunity for automation. If the system encounters a problem during data evaluation – for example a workpiece approaching its load limit in the metalworking industry – then countermeasures can be taken in real time. Temperatures could be adapted automatically, machines re-calibrated or – in the event of wear and tear to the systems themselves – be serviced earlier to avoid production outage. But there is also potential for digital transformation outside the core business of manufacturing companies. This includes, among other things, communication with customers or suppliers, which can be optimised through data via new digital channels, platforms and forms of cooperation, as well as collaboration between the employees themselves.

Finally, a brief outlook: where do you see German small and medium-sized enterprises in 2030? Or better, where would you like to see them?

I would hope that by then all small and medium-sized enterprises would be clear about the extent and relevance of digital change. At the current pace of change in our life and workplace, it is only set to increase further and it will be too late to start 12 years from now. There are already several highly innovative companies that have already had great international success with their business model internationally, but there are also many small and medium-sized enterprise who primarily regard digitalisation as a risk and wish to continue waiting. Many of them are still not aware of its possibilities and when optimising their own existing business model, are too busy looking at relevant developments in other companies, other sectors and other countries. However, in my opinion it is crucial to exploit this potential to continue to position yourself as a trailblazer in Europe and compete against large corporations and innovative startups.