Kampmann incognito in the entrance areas of urban rooms

Right at the beginning, there is this sudden feeling of wind. It is particularly intensive of winter days, Customers enter a department store and are blown on gently. Right at the threshold between cold and warm. Or vice versa. The warm air gives them a cosy feeling when entering. When leaving, it reminds of the season. With that, the draught has a technical function: the cold air is meant to stay outside, the warm air inside. Clearly separated from one another, this caters for an improved energy balance. At the same time, physics need to be overcome as, by nature, warm air rises and cold air accumulates by the floor. Without any technical assistance, every public entrance area would be an extremely draughty, cold, unpleasant and very expensive matter. Businesses want the opposite for two reasons. From a business point of view: entering is like the first impression, a kind of business card. It should be as pleasant and inviting as it possibly can be. 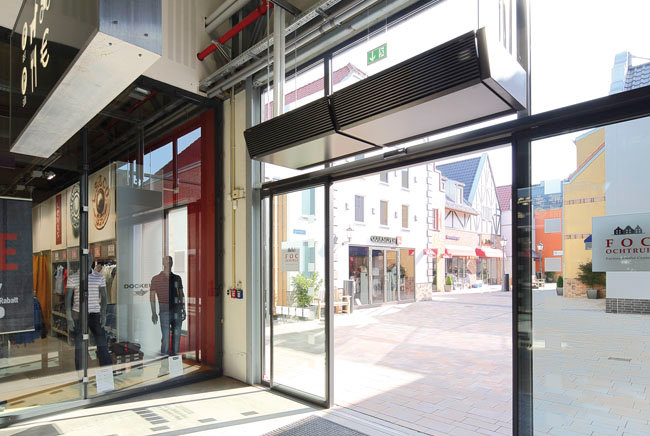 THE IDEAL COMBINATION FOR A CLEAN AND EFFICIENT ENTRANCE: Doormats and door air curtains by Kampmann.

The solution to this double business desire is installed above entrances almost invisible for millions. Kampmann’s door air curtains transform the natural laws of physics into their opposite, because door air curtain technology pushes the warm indoor air down at the open threshold instead of allowing it, by nature, to rise upwards. Like an invisible yet feelable wall, the door air curtain places itself in front of the coldness which thus remains outside instead of it taking its natural way across the floor into the inside. A small power station works on the inside of the Kampmann door air curtain technology. Fans suction the room air and a heat exchanger heats up the air with a room temperature of about 20 degrees to a pleasant body temperature of 36 degrees in no time at all. The rectifier disperses the now heated air at an output speed of five to eight metres per second downwards. The effective and efficient air curtain can be further optimised by way of tandem technology. In this case, a non-heated first air curtain is sent ahead of the heated main curtain. This way, the first air curtain isolates, on the one hand, the cold outside air and the warm inside air from each other. On the other hand, it works like a protective flow, which amplifies and accelerates the warm air on its way downwards and also reduces the exchange of cold and warm air in large entrance areas to a physically unchangeable minimum. The advantage of the Tandem warm air curtain can be measured in the energy balance. The accelerated and stabilising first air curtain enables energy savings of up to 38 percent in comparison to conventional warm air curtain technology.

Kampmann offers various different door air curtain systems in various sizes and versions for sensitive entrance areas. The aim is always to make every public entrance area as pleasant and energy-efficient as it can possibly be made. The tandem door air curtain offers a proven door air curtain technology, which was originally developed by Kampmann. For the most common construction size of two metres in width, the additional investment is amortised after only 1.6 years on an average of 24h daily operation from October to March. At the ISH 2017 in Frankfurt, Kampmann will also present two more top innovations. With the tandem door air curtain, these relate to an optimisation of the air supply with the established efficiency of the tandem technology. With the UniLine door air curtain, a self-regulating damper in the air outlet ensures that at a low operating mode of the unit, the maximum air supply velocity is achieved for effective shielding. To the advantage of the customers, 67 percent of electrical power is saved and the noise emission is reduced by up to 8 dB(A). 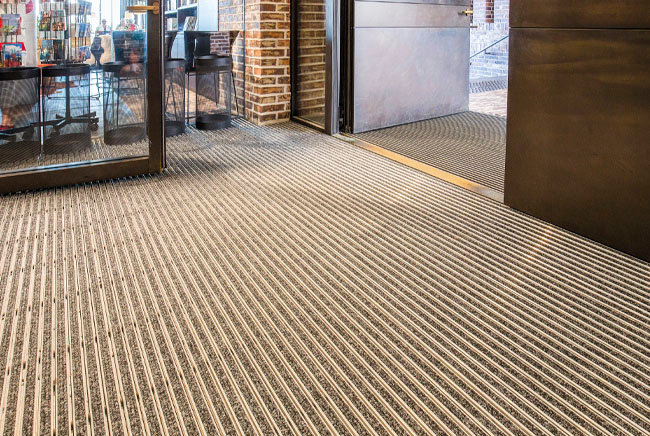 CLEAN WALKING ZONES can be found in almost all shops and public facilities – not rarely by Kampmann.

Door air curtains by Kampmann are frequently to be found particularly in the chain store sector. Large discount stores appreciate the quality, long service life and the low maintenance factor of ProtecTor, UniLine and Tandem. Even a custom-made oval shape had been manufactured for London Heathrow Airport. Kampmann’s warm air curtains are even being used in Saudi Arabian railway stations. Where their warm air curtains are to be found and efficiently shield cold and warm air from each other for comfort is where the reflex area of millions is – the doormat area. Kampmann Eingangsmatten GmbH Gräfenhainichen in Saxony-Anhalt (Germany) is responsible for the Kampmann doormats. Kampmann founded a branch in the halls of a former nationally-owned company exactly 25 years ago; since 2010, it has been operating as an independent. Kampmann door air curtain and Kampmann doormats and grilles form a perfect synergy especially the chain store sector. After all, there is nowhere else where more people pass large entrance areas. Especially in the discount sector, energy and hygiene efficiency thus make the highest demands on the corresponding technology. With Kampmann- doormats, particularly highly effective micro scratching edges along the aluminium profiles make the qualitative difference. Only the products of Kampmann Eingangsmatten GmbH have such scratching edges. They optimise the removal of dirt in the entrance area and thus reduce the costs of cleaning the building. Just like the Kampmann door air curtains, the doormats and grilles are produced and manufactured in the in situ production plant.

"We have to develop products that the market wants."

Doormats and grilles are available in many possible sizes, colours and designs. Similar to cars, the colour slate-grey dominates. Still. For the optical impact as well as hygienic function is becoming increasingly important for companies. After all, the first metre can also be an eyecatcher – trade, above all, is increasingly turning its entrance area into an exhibition room. Engraving the company brandmark, a “Welcome” or changing messages such as “Happy Easter”, depending on the season, are possible thanks to modern laser technology. Rüdiger von Scheven, who has been in Gräfenhainichen for 25 years now, as Managing Director responsible for Eingangsmatten GmbH, says: “We have to develop products that the market wants.” And the market wants more and more innovative products. For example, doormats with strips that light up in the dark that transfer the emotions of the room to the entrance area. Or speaking mats: “We have already made developments with sensors, where the mat communicates with the building automation system via smartphone”, says Rüdiger von Scheven. Because the market and its wishes are becoming increasingly customised, Kampmann Eingangsmatten GmbH gave itself the new online presence “kafloor.de” on the occasion of its 25-year anniversary. It is amazing what doormats and grilles are able to do. And then again, not. For the way the hairstyles on the heads of million have significantly changed in 25 years, so have the mats at their feet, across which they mainly walk untouched – at least still…