Beyond expectations: the luxury residence BEYOND by Geisel raises the bar

It is the most exclusive residence in Munich – and possibly even the most unusual. Since the end of 2017, the BEYOND by Geisel has been offering luxurious accommodation to demanding travellers as well as and in particular to closed groups, whereby luxury in this case does not mean pomp, not at all. The luxury of the BEYOND is of a different nature – more discreet, more distinct. It is a unique concept that has not been implemented in this way before. And that is precisely why the operator family Geisel left nothing to chance when planning it.

The location of the BEYOND could not be more exclusive. Located directly on Marienplatz opposite the town hall, it is as central and prominent as it possibly can be in Munich. Yet, you have to take a good look to notice the hotel from Marienplatz (which is always packed with people). It is situated on the upper two floors of the Hugendubel building, which was reopened in August 2017 after one and a half years of modification. “BEYOND by Geisel” it says ostentatiously from the sign on the fifth floor of the building. This understatement is not a coincidence, because the BEYOND defies all classical categorisations. Yes, in the end, it is a luxury hotel, but one that does not want to be compared with other luxury hotels. Michael Geisel says: “We are redefining luxury.”

And this is where we ask ourselves: what does luxury mean today? In our fast-moving world? That is becoming increasingly anonymous? In which communication is mostly digital, seldom face-to-face? Questions the three brothers Stephan, Michael and Carl Geisel asked themselves. Questions they also asked of the Spanish-German architect’s office Nieto Sobejano Arquitectos. In the process, a concept was born which, on the one hand, was extraordinary and, on the other hand, also appears to be self-evident because it commits itself very much to the hotel guests. Now, you could interject that the wellbeing of the guests is near to the heart of every hotel, especially a luxury hotel – and rightly so. But that is exactly where the BEYOND goes at least one step further.

Let us enter into the hotel now: to do so, we leave the bustling Marienplatz and take the discreet entrance via the Rindermarkt. The hotel is on the fifth and sixth floor and thus towers above the surrounding buildings. A fantastic view over the centre of Munich, especially from the roof terrace, is thus the first unique feature of the BEYOND. Then the bedrooms: 19 in total, divided into nine categories. One thing is common to all – the timeless, reserved elegance. And now to the chief attraction of the hotel: the bedrooms and suites are grouped around a central living room. And even calling them “bedroom” and “living room” reveals things are somewhat different in the Beyond to in other hotels, namely simply cosier and above all more personal. We will get back to that later.

It is a long way from the idea over the concept to the finished hotel room. Yet, the three Geisel brothers took a shortcut: at an early stage in the project, they invested in a model room that was fully functional and in the original size and was built in a hall in the north of Munich. The Geisels are very experienced in the hotel business. They are now running it in the fourth generation and can look back at many successful modernisations and new building projects. Lastly (the beginning of 2018), the three of them opened the Cosmopolitan Hotel – with a new and innovative concept and under the name of Schwabinger Wahrheit. That is how they knew that building a model room would initially cost money and mean more effort, but that this investment would pay off. And in the end, not only saved costs but led to a better outcome – as was the case with the model room that was built for the Schwabinger Wahrheit (yet a scaled-down version with main focus on the design). 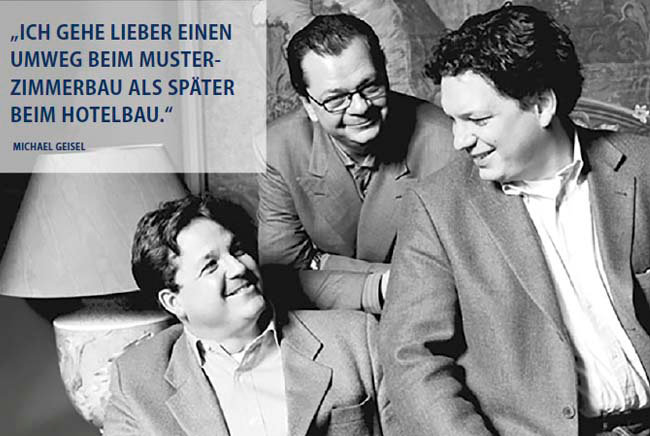 "I'd rather take a detour in the sample room layouts than later in the hotel construction." MICHAEL GEISEL

The Hospitality Development Service (HDS), from Garching, responsible for the building of the model room, designed it. The close proximity to the building site was certainly advantageous in this case, but in general, HDS looks after hotel investors all across Europe. After in-depth preliminary talks and consultation appointments between the Geisel family and HDS, the construction of the model room began at the beginning of June 2016. In the process, a wooden carcass of the actual room was reproduced in the exact same size and layout. Then the finishes and installation followed, exactly like the “real” building: sanitary, electrics, tiles, wallpaper, air conditioning and so on. Even that was an extremely important step: spray patterns, the lighting atmosphere, collisions, dissonances in the design … all of this could be examined and optimised where necessary. The Hospitality Development Service accompanied and recorded all steps. When looking at the model-building process in retrospect, the troubles that were spared soon become clear: if the mistakes (that happen in absolutely every building project) had not been noticed until in the building at Marienplatz, that would have involved massive delays and all the more costly modifications. This alone made the construction of a model room worthwhile.

The Hospitality Development Service is thus a place where house builders, architects and investors can work on the design and (technical) equipment of their hotel room unhurriedly, away from the building site, in order to subsequently be able to enter the final construction phase with confidence with a harmonised and reviewed concept. Michael Geisel also appreciates this feeling: “with BEYOND, we are breaking new ground. And thanks to the Hospitality Development Service, we were able to take the path to our room before the hotel had been finished. I prefer to take a diversion when building the model room than later when building the hotel.”

Let’s get back to the “living room” in the BEYOND. This room is the central place of the residence. The high walls are as high as the two floors and are almost completely covered by shelves filled with about 450 novels and illustrated books on many different subjects. This makes the room seem like the reading room of an exclusive library. It never ceases to impress: with the large skylight and the comfortable furniture, you simply wish to browse the shelves, sit down and read at ease. Yet the room is also perfectly suitable for spending time together. It is a real living room to relax and spend some time in – whether alone or with company.

GROUP HIDEWAY – THE BEYOND AS THE LARGEST SUITE IN MUNICH

The room is given special importance when the residence is fully booked. That is when the BEYOND becomes the largest suite in Munich. The guests then share the 1,060 total square metres of the residence. They are among themselves, meet up in the living room, in the restaurant or in the kitchen, about which there are a few words to be said. Thus: whether a pop star with the entire entourage, an extraordinary company event or for other occasions that require a special format – the BEYOND is so small that you can have the entire hotel for yourself and your guests. And it is so big for you to relax and have a good time surrounded by people who are important to you. This is how the BEYOND manages something that many other hotels only promise: a real home for a limited time. This essentially includes the personalised service. Daniel Campbell is the hotel concierge. He welcomes his guests with heartfelt warmth and thus caters for a good feeling right from arrival. Campbell and his team take care of all needs and wishes the guests may have. They give tips on where to go out, where to shop, they organise tickets … everything is taken care of. The same also applies to the catering in the BEYOND. After all, there is no menu. Which menu would be large enough to list everything the kitchen can produce – namely everything! No opening hours, no permanent dishes: culinary art in the BEYOND means absolute freedom. The private chef prepares any dish the guest asks for. From an opulent set meal to a midnight snack. As the kitchen is open, you can also do it yourself. Like at home.

The warmth and personal proximity makes the BEYOND a hideaway in the heart of Munich. An exclusive place for anybody who appreciates the luxury of privacy. Conceived by an hotelier family that does not make compromises to offer guests the best.

The building of a model room by the Hospitality Development Service has the following advantages:

• Construction of a fully functional room in the original size
• Other rooms (such as reception and hallway) are also possible
• Loads of time to test and optimise
• The neighbouring hotel competence centre serves as material library, conference room and as source of inspiration and information
• Full takeover of the prototyping process
• Avoid bad planning and thus costly changes to the actual construction
• Model room will be taken to the building site as a template if requested
• Best consultation and support in a relaxed atmosphere
• Absolutely reliable and anonymous (Non-Disclosure Agreement)