Consumer history at Leipziger Platz: the demise of a department store and its resurrection as a shopping centre.

Leipziger Platz in Berlin is one of the focal points of Germany 20th and 21st century history. The most splendid and largest department store in Europe – Warenhaus Wertheim – once stood there. But National Socialism, destruction, war and a lingering decline during the period when the Berlin Wall cut through the octagon sent the structure into a dark slumber that only ended with German reunification. But Leipziger Platz has today once again become a central and vibrant place in Berlin – and was returned to its great department store tradition in 2014.

The thing that people passing through the square these days hardly notice is that Leipziger Platz is part of a huge urban ensemble. Pariser Platz with its Brandenburger Tor, Mehringplatz at the Landwehrkanal in Kreuzberg and also Leipziger Platz, which is considerably larger than the neighbouring but much more famous Potsdamer Platz, were all built between 1730 and 1738 under the supervision of Philipp Gerlach, an important architect during the Prussian period. That’s why it’s no coincidence that these locations linked by Ebertstraße and Stresemannstraße possess geometrically harmonious forms: Pariser Platz is square, Leipziger Platz at the centre is octagonal and Mehringplatz, which delineates the southern end of the trio, is circular. The fates of these locations could hardly have been more different: while Pariser Platz always maintained a certain level of splendour even while the city was still divided thanks to the Brandenburger Tor, Mehringplatz was never able to return to its former glory following its destruction in World War II; today, the square is regarded as a troubled hot spot. Leipziger Platz experienced even more turmoil in its past – a past that was also closely linked to that of the Warenhaus Wertheim.

The WARENHAUS WERTHEIM was formerly a huge attraction in Berlin. One of Europe’s first traffic-light systems was installed on the roads in front to control the high volume of traffic that its popularity generated.

The Wertheim Group, i.e. in the person of the son of Georg Wertheim, its founder, introduced and established the department-store concept in Germany. Generous sales areas, attractive displays, fixed prices, the right to exchange purchases – everything we take for granted today only became a part of everyday consumer life in Germany with Wertheim. Starting out in Stralsund, Georg Wertheim expanded his business model, which he had duplicated from France, to Berlin in 1885. He began to think about how best to design a department store and got in touch with the previously rather unknown architect Alfred Messel. They started to develop a department-store concept in 1893 that differed markedly from the French model and that made architectural history.

“LITTLE ELSE IS MORE MOVING FOR ME THAN THE SIGHT OF THE TALL PILLARS ON THE LEIPZIGER STRASSE.”

The external appearance of the department store, which faced out on to Leipziger Platz in 1896, was already impressive: Messel spanned broad sections of glass between slender pillars that borrowed from the Gothic style and crowned the structure with a mansard roof finished with green roof tiles. The effect was remarkable: Wertheim was on everyone’s lips, both among consumers and architects. The influential Belgian architect and designer Henry van de Velde wrote with unbridled enthusiasm, for example: “Little else is more moving to me than the sight of the tall pillars on the Leipziger Strasse, which rise effortlessly to bear their loads that appear to them to be as light and beautiful as could possibly be. (. . .) This entire structure, which overhangs the enormously smooth surface of the sections, has been made from bronze that lives and flashes up there; it rises like a crown adorning a monument and that in the evening beams out streams of light.”The interior developed an effect that was no less impressive. The central sales space was 22 metres high and capped with glass to create a sense of lavish splendour. Monumental frescoes adorned the front, a six-metre-high sculpture of a woman led up the representative staircase to the floors above where more goods were on sale. The Warenhaus Wertheim on Leipziger Platz was an immediate success and far more than just a department store – it was an attraction, a destination for outings. And so Georg Wertheim expanded and had Alfred Messel add further buildings until a sales area of around 70,000 square metres had been created. There was no other department store in Europe that was bigger. None was more beautiful. And then Hitler rose to power.

THE MALL OF BERLIN stretches across the entire rear block of buildings. The front façade was printed on tarpaulins for the construction phase. The building in the left foreground remains an artificial front to this day.

The Wertheim family was Jewish. SA men bearing signs saying, “Deutsche! Wehrt euch! Kauft nicht bei Juden!” (“Germans! Defend yourselves! Don’t buy from Jews!”) stood outside Wertheim’s doors during the ‘Boycott of Jews’ organised by the National Socialists. As a result, Georg Wertheim signed over his entire business to his wife Ursula who was not Jewish. But the Nazis still classified the company as ‘entirely Jewish’ and confiscated it in 1937. They changed its name to AWAG (Allgemeine Warenhaus Gesellschaft AG). And then war. Three bombs in 1943 and incendiary bombs shortly before the end of the war in 1945 severely damaged the complex – but it was not irreparably destroyed. Reconstruction was, however, prevented because of the fact the border to the sector ran precisely through Wertheim and the area consequently degenerated into a no-man’s land during the Cold War. The remains of the department store were torn down in 1957 and the Berlin Wall cut through Leipziger Platz from 1961. Nothing happened then for 30 years.

THE BEGINNING OF THE END FOR WERTHEIM: SA men blocked the entrance during Hitler’s boycott of Jews in 1933.

In the order of recent history, only a blink of an eye has passed between the splendour of the Wertheim department store at its pinnacle and the first efforts to revive the area following the fall of the Berlin Wall – and yet it seems like ages have past since the beginning and end these two chapters. First, the ‘Tresor’ opened in 1991 in the room where the safes used to be housed in the Wertheim department store. It was Berlin’s first techno club and the special atmosphere (a musty cellar vault with hundreds of old, broken-open lockers and the feeling that the space was more a squat than a rented venue) turned it into a blueprint for countless other techno clubs across the world. The Tresor boomed until 2005, when the building was demolished to make space for new development plans. The club relocated within Berlin and remains popular with party-goers to this day.

As unfortunate as it was for the legendary ‘Tresor’ club, no ‘small’ club could have ever stood in the way of the development of a central square in the German capital – something that Leipziger Platz had once again become after the country’s reunification. Plans to resurrect the octagon were quickly drawn up after 1990 with the aim of filling all eight corners. A bird’s-eye view of the square could give the impression that the project had already been brought to a successful conclusion with the opening of the Mall of Berlin. In fact, however, the north-west corner of the square remains an artificial front – a fake because the ‘structure’ is just some scaffolding covered with tarpaulin on to which the façade has only been printed. This trick allowed several buildings to be simulated during the planning phase of reconstruction to offer passers-by an impression of the projected development. Anyone using Google Street View to ‘travel’ to Berlin today will not only still be able to see the undeveloped property of the north-west corner as a backdrop – it still also presents the Mall of Berlin as an artificial front (as of January 2016). But in contrast to the property opposite, for which no-one has yet expressed an interest, the Mall of Berlin was opened on 25 September 2014.

The Mall of Berlin is huge. But it doesn’t look like it. At least not at first sight. Because the official name of ‘LP12 Mall of Berlin’ is a little misleading. ‘LP12’ stands for Leipziger Platz 12 and it’s the address for the main entrance, if there is such a thing for a mall of this size. The restraint that the façade presents to Leipziger Platz seems astonishingly reserved, the architecture of the structure, which cost more than one billion euros, appears almost faceless. Particularly as the mall here creates the impression that it only occupies the one corner of Leipziger Platz. There are reasons for this: exiting the mall to the left takes the visitor down Leipziger Straße, which cuts through the octagon, to the front of an architecturally completely different façade after just a few metres – as if the mall had ended there. Another entirely different picture emerges again a few metres further on. The appearance changes in this way several times over a distance of 300 metres. And yet all this is still the Mall of Berlin. The Berlin-based ‘nps tchoban voss’ firm of architects has not created a uniform, representative or even boastful look for the prestige property but has, on the contrary, adapted the mall to the typical Berlin cityscape in all its stylistic diversity. The mall could be mistaken for a residential structure if it wasn’t for several neon signs on the façades. A remarkable step for the investors and architects. 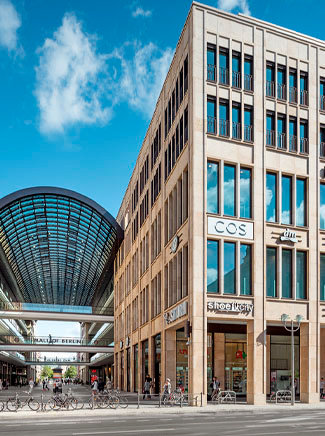 A major shopping complex needs extensive technical building services. Kampmann is represented throughout the mall with a whole range of products: KaCool ceiling and wall units, Katherm trench heaters as well as TOP and Ultra air heaters – all governed by the smart KaControl unit.

The LP12 covers a total area of 210,000 square metres, of which 76,000 square metres are sales space that is home to 270 shops. All the brands that you’d expect from such a lighthouse project are, of course, represented here, particularly the high-end ones. But a discount supermarket and a major electronics chain can also be found here. The food court is the largest in Berlin and the central piazza invites people to linger and take a leisurely stroll around it. The complex is also home to apartments, office space and a hotel. So just a normal, if gigantic, shopping mall, after all? No doubt about it. And yet the mall exerts a special pull. The same centre somewhere in the province on a green-field site would not have been this attractive. But the LP12 is right in the middle of Berlin. Right on the historic Leipziger Platz. Where the Wertheim department store once stood. The piazza forms a line of sight towards the Prussian House of Lords, the seat of the Upper House of the German Parliament. The Holocaust Memorial is located a little to the north of that and then comes the Brandenburger Tor. . . The Mall of Berlin’s historic and urban environment seeks its equal. Even if the LP12 is just another temple to consumption, it’s the perfect building for the location.