The cooperation between two air-conditioning specialists – Kampmann and NOVA – is delivering great benefits to the building-services industry.

It was actually quite the obvious thing to do: Kampmann and NOVA are simply the perfect match. One of them is a specialist for decentralised air-conditioning and the other for centralised ventilation. Both possess international experience and both are innovation drivers in the market. The two together are able to plan and design integrated and highly efficient air-conditioning solutions for buildings of all sizes – and offer a range of performances that is second to none.

As obvious as the merger of the two companies was and as much as we believed that the cooperation would be successful – hardly anyone expected the resulting success to be so rapid and sustained. Today, six years on from the signing of the contract, we’re not only able look back on a large number of jointly implemented projects but we’ve also been able to develop innovations and technologies that have only been possible as a result of our cooperation. Knowledge wasn’t only exchanged and transferred at strategic meetings but also specifically at Kampmann’s own Research & Development Center. The added value for planners, architects and building owners that the two companies generate by working together begins long before that – with consulting.

It’s often very complex to plan large construction projects that need air-conditioning. That’s partly due to the nature of the business and partly due to the fact that hardly any provider is able to deliver both project-related planning and practical implementation based solely on its own range of products. Well, that was previously the case, because now Kampmann and NOVA’s joint venture has made it possible for project managers to confidently source both their planning and implementation solutions from a single company. 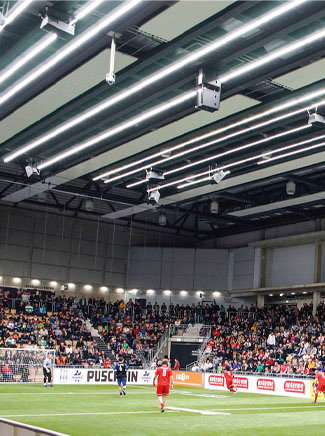 THE EMSLANDARENA: flexible climate for a flexible hall.

The general contractor for the EmslandArena in Kampmann’s home town of Lingen was one of the first to take advantage of this option. The ground-breaking ceremony for the multifunctional hall was held in June 2012 and the grand opening was celebrated – on time and within the budget – with a Katie Melua concert on 30 November of the following year. The EmslandArena has from the start been just as much a success as the smooth progress of the construction project was: Katie Melua, Jan Delay, Die Fantastischen Vier, Fettes Brot, Amy MacDonald... the coming and going of A-listers has been non-stop. But the crowning glory is the news that Nobel Laureate Bob Dylan will be performing in Lingen in April 2017. The EmslandArena has much more to offer than just concert highlights, however: sports events, conferences, receptions, intimate acoustic concerts, signing sessions – the EmslandArena provides the appropriate space and/or seating for all sizes of events. The climate needs to be as flexible as the arena is.

That’s why four NOVA central ventilation units have been installed on the EmslandArena’s roof. Two of them have been dedicated to ventilating all the adjoining rooms. The other two have been installed solely for the venue hall as such. Both units may also be operated independently of each other, which means that they’ve been perfectly adapted to the concept that allows for the arena’s flexible use. Arena Director Florian Krebs is very pleased with the solution: “It wouldn’t be very economical to have to use both ventilation units when smaller events are being staged. The concept presented by NOVA is simply perfect for our widely varying needs.” But, when the hall is sold out for major events, all air-conditioning units are together able to supply 140,000 cubic metres of fresh air every hour – for which NOVA is responsible. Kampmann, on the other hand, supplied the decentralised system in the shape of 420 running metres of Galaxis radiant ceiling panels, which run through the entire arena to deliver radiant heat and ensure a pleasant climate.

The cooperation becomes even more exciting when the centralised and decentralised units communicate with each other because they can work in tandem to achieve massive savings. Kampmann and NOVA have called this technology ‘Hybrid ECO System’ and the OBI DIY store in Hamburg-Bergedorf is a wonderful example of the way it works and the amazing efficiencies it delivers. 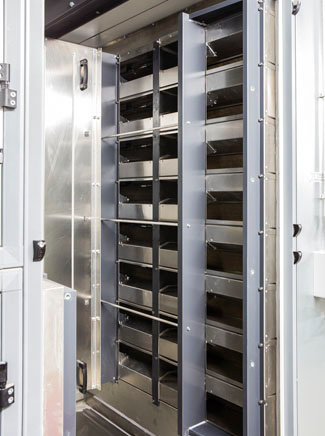 PIONEERING: regenerative cooling with Ka2O technology at the VOSS company for technical building services in Haselünne.

35.8%. That’s the number that resulted in the DIY store being certified as a ‘GreenBuilding’, the EU’s programme for energy-efficient, resource-conserving construction. 35.8%. That’s how much energy the OBI market is saving compared with the value required by the German Energieeinsparverordnung (EnEV – Energy Saving Ordinance). That the certification was awarded is also in a large part due to the Hybrid ECO System, in which the tasks of ‘ventilation’ and ‘temperature control’ have been separated. It’s a system that uses a centralised ventilation solution: six NOVA ventilation units with a total volume flow of 40,000 cubic metres an hour have been installed on the OBI store’s roof. CO2 sensors inside the store determine the amount of fresh air required so that the air-conditioning units only supply as much fresh air as is needed. The temperature is then controlled directly in the store’s rooms by decentralised units, i.e. TOP unit heaters and Galaxis radiant ceiling panels. The combination delivers maximum efficiency: the roof units are started when fresh air is required. The very high efficiencies that the integrated heat-recovery systems achieve means that additional air heating by the decentralised units is frequently not even necessary. which is when the TOP air heaters practically operate solely as air outlets. But, when the units are used for heating, they’re many times more efficient than if the heating had been provided by the central ventilation system because the decentralised units only consume a fraction of the electrical power that would otherwise be needed.

The Ka2O technology is an even more progressive innovation that cooperation between Kampmann and NOVA has produced. It is based on the rethinking of indirect evaporative cooling with water as the refrigerant: a modular design, the humidification of the air directly in the heat exchanger and a special fin and air-duct geometry deliver unique features. For instance, particularly high temperature reductions of more than 20K are possible – and this (in contrast to conventional systems) regardless of the temperatures outside! The fact that the modules can be stacked and used together means that the Ka2O technology’s efficient reverse flow always remains at consistently high levels. And not only during cooling. The unit’s heat-recovery feature kicks in when outdoor temperatures mean that heating is required inside. The heat recovery rate here is up to 87%. All arguments that also convinced DMG Mori – the world’s leading tool and milling machine manufacturer – because it installed three air-conditioning units that use Ka2O technology on the roofs of its company’s headquarters in Bielefeld at the beginning of 2017. One of these units possesses 60 individual modules (maximum possible expansion) that generate air flows of 24,000 cubic metres an hour.

Which brings us back to now – the place from where Kampmann and NOVA can look back with great satisfaction on their achievements. But the two companies are actually focusing more on a future together, which seems very bright thanks to the innovative and environmentally-friendly solutions that they have and are developing.