The German football association (DFB) is building its new football academy in Frankfurt am Main. AHUs from NOVA Apparate GmbH with centrifugal fans from ebm-papst are used to ensure the perfect climate in this talent factory.

When the young footballers of the DFB head to the changing rooms with red faces after two hours of intensive training, very few of them will be thinking about the subsequent tactics session in the video room. First they have to acclimatize and take deep breaths before being able to analyze their next opponent.

Accelerating this “cool down” requires a good team environment, of course. But the right indoor climate is also important. After all, a cool head and plenty of oxygen are best for discussing tactics. It is a good thing that the DFB has installed ventilation systems made by NOVA Apparate GmbH in its new football academy. They supply the entire building complex with sufficient fresh air and regulate the temperature and humidity. The academy boasts a total of 22 AHUs, located everywhere from the seminar rooms, fitness rooms, offices and changing rooms through to the press conference hall and athlete house with its 33 rooms.

Ka2O technology – a cooling method based on indirect evaporation cooling – is what makes the AHUs used so special. The used air is taken in from the interior and moistened with small spray nozzles. The water evaporates and extracts heat from the exhaust air. This occurs in the Ka2O counter-current heat exchangers, where the warm external air drawn in is cooled down by the cold exhaust air without mixing with it. Finally, the outside air is filtered and fed into the interior.

Compared to classic refrigeration machines, the AHUs completely dispense with chemical refrigerants or mechanical cooling. This makes evaporative cooling particularly environmentally friendly. After all, it can make do with nothing other than water and a bit of electrical power for the water pumps and fans. As a result, the AHUs in the DFB academy are extremely energy-efficient and almost completely CO2-neutral. The DFB places great value on this, which shows that more and more companies are using Ka2O technology in order to reduce their carbon footprint.

"We were so impressed by the environmental credentials of the evaporation cooling concept, that we decided to use the AHUs from NOVA Apparate GmbH for the new football academy.“ – Winfried Naß, Technical Project Manager – Deutscher Fußball-Bund e.V.

The only disadvantage of evaporation cooling so far has been the limited cooling level – a maximum of 12 Kelvin. However, this problem has been solved with the innovative Ka2O technology from NOVA. The trick is: instead of using a single large heat exchanger, many small heat exchangers are combined in modular form. In addition, the module surfaces through which the old room air is drawn in are sprayed directly with water. This produces a continuous water film across a number of small surfaces and an overall cooling effect of the outside air of up to 20 Kelvin. TÜV Süd, a German technical service organization, has confirmed this. 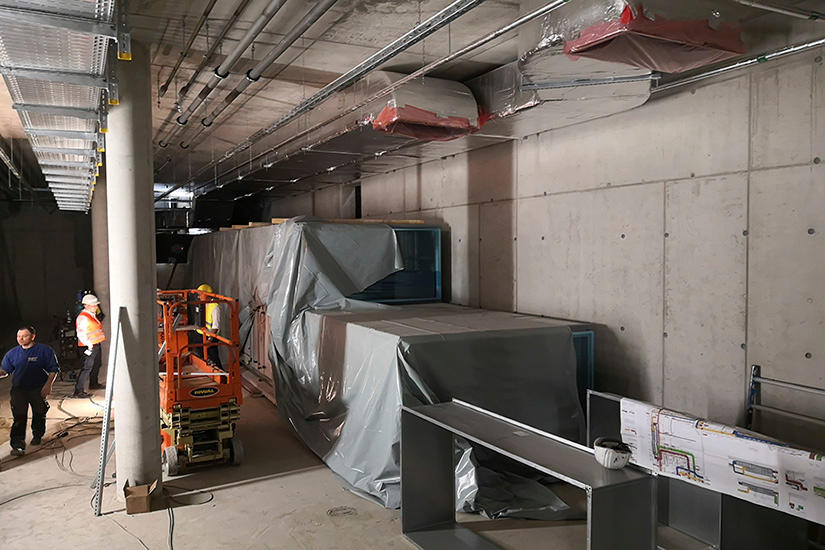 In construction: one of 12 AHUs with Ka2O technology in the new DFB academy in Frankfurt. Source: NOVA Apparate GmbH

But how does the cooled air then get into the interior? This is where RadiPac centrifugal fans from ebm-papst come into play. They have a very robust, low-vibration high-performance impeller that can withstand high back pressures. The RadiPacs are also equipped with GreenTech EC motors. This means that they have a particularly high level of efficiency with low power requirements. This makes RadiPac fans perfect for use in AHUs from NOVA. Firstly, due to the back pressures generated by the heat exchange. Secondly, because of the environmentally friendly cooling concept behind Ka2O technology.

In addition to energy efficiency and low CO2 emissions, COVID-19 has also been an important topic since last year. After all, poor or incorrect ventilation increases the risk of infection. But the AHUs from NOVA also excel in this regard, as they only use fresh air from outside. This means that the air indoors is continuously diluted and aerosols considerably reduced. This was an essential factor for the DFB, and already state of the art for NOVA even before the pandemic.

Upon its completion at the end of 2021, the football academy will provide an ideal, safe working climate for its 428 employees. And the young German footballers will be able to cool down more quickly after their hot and tiresome training sessions – without having to reach for the ice bucket.

This article first appeared in the company blog mag the magazine from ebm-papst.