Nine days of world-class tennis - presented by Kampmann. A review.

At the end there were tears: Michael Stich said goodbye to "his" German Open at the Rothenbaum. It was on July 29, 2018, the final day of the traditional tournament.

For nine days, the audience experienced world-class tennis - and quite a few surprises.

One of them: the main sponsor. Kampmann presents the German Open. Many spectators first had to look up in the tournament booklet, who that actually is. This marks the first time Kampmann has appeared as a sports sponsor since the end of the International Dressage Festival Lingen in 2013. And how! The brand presence on site was impressive. The media reported extensively, the TV station SKY broadcasted live. The exclusive merchandise sold excellently in the Kampmann Pagoda. Kampmann GmbH, which tends to stay in the background as a manufacturer in the consumer market, is thus attracting public attention.

But now for the sporty: Michael Stich and John McEnroe set the first big highlight of the tournament week on the second day. In the legends match in a sold-out house, the native of Hamburg won against the charismatic American on a narrow margin. And even if the fun did not fall short - as announced by the two, they have played a challenging game at the highest level. How much the match meant to Michael Stich became clear when he sank to his knees after the match ball had been transformed. 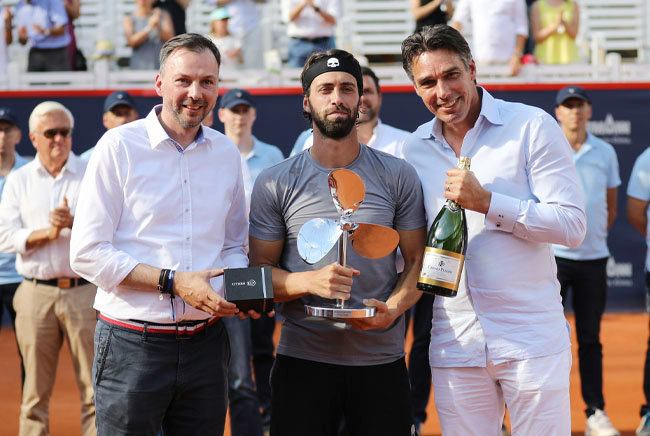 The tournament itself was marked by two other surprises: First, the completely unhanseatic weather with peak temperatures of up to 35 degrees. And on the other hand, the "dying favorites" in the tournament. Thus, the two top-seeded Dominic Thiem and Diego Schwartzman already dropped out in the quarterfinals. At least, last year's winner Leonardo Mayer made it to the final of his favorite tournament. But it was the tournament of the qualifiers, who partly got very far. Above all, the Georgian Nikoloz Basilashvili, who defeated Leonardo Mayer in the final in three sets and thus won his first ATP tournament.

The award ceremony was held by Hendrik Kampmann and Michael Stich, who - as mentioned in the beginning - subsequently resigned himself. A lot of things came together for Michael Stich: Just before the tournament, he was solemnly accepted as the sixth German in the Tennis Hall of Fame in Newport / Rhode Iceland. As tournament director, he also celebrated his tenth anniversary and at the same time it was his last tournament at the Rothenbaum. The tournament where he climbed over the fence 40 years ago as a small boy to see his idols. The tournament he won in 1993 and whose tournament director he has been since 2009.

"I wish so much that this tournament will live on, even though we're not allowed to host it anymore," Stich says in a tear-stained voice on the Center Court. He also emphasized, "We've built so many partnerships in the ten years that we want to stay connected to tennis with this team.“ Where this is going and whether Kampmann will be part of this future is yet unclear. Finally, Hendrik Kampmann is extremely satisfied with the engagement: "It was a fabulous tournament and a wonderful partnership!"