A total of 14,000 circulating-air-cooling units for Meyer Werft cruise ships

MAC Hamburg GmbH has placed an order worth millions with Kampmann GmbH. MAC Hamburg is the air-conditioning system supplier within the Meyer Werften Group for all its shipyard locations for engineering, materials management, assembly and commissioning. The contract, which was signed on 4 August 2016, is for equipping four cruise ships, with the option of more being fitted out at a later date – a project that will benefit not only the companies involved but the entire Emsland region. 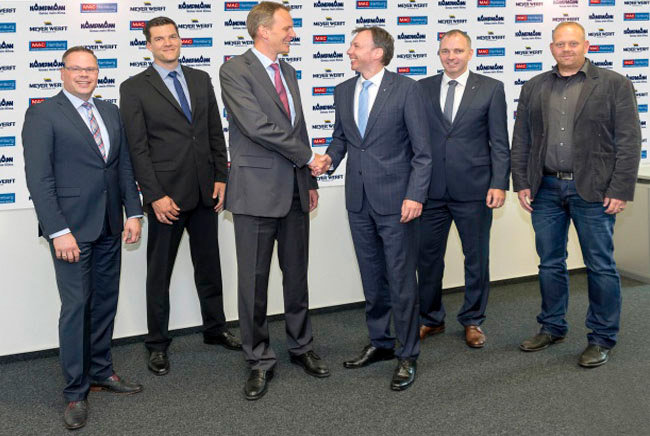 The signing of the contract at Kampmann GmbH's headquarters in Lingen marks the end of an intensive project phase in which Kampmann and MAC Hamburg were successfully able to coordinate with each other. The implementation phase is now commencing as a result of which Kampmann will be supplying almost 14,000 circulating-air-cooling units for installation on the first four ships – each with around 3,500 crew and passenger cabins – that are being operated by a large international shipping company.

“The greatest challenge in developing the recirculating-air cooling units was achieving compliance with the international guidelines for shipping,” said Martin Giese (Head of International Hotel Development) describing the process along with Sascha Klimansky, Technical Project Manager and Product Manager at Kampmann.“Our expertise with the realisation of air-conditioning for hotel rooms had to be adapted to cabins on ships, which must cope with fluctuating external conditions, internal loads and temperatures. We were primarily assisted in this regard by our in-house Research and Development Center (RDC). We are delighted,” said Giese, “that the intensive project phase has been brought to a successful conclusion.”

Competence from the economic region of Emsland

Hendrik Kampmann, Managing Director at Kampmann GmbH, and Andre Gebken, Managing Director at MAC Hamburg GmbH, are very positive about the cooperation: “Kampmann was very convincing in its efforts. We’re both looking forward to demonstrating the units’ efficiency and performance capacities when they’re in use and within the context of the air-conditioning concept for the ships.”

Delivery of the units for the first ship will commence in July 2017.With its strong regional roots, Kampmann is not only protecting jobs, it is also again demonstrating the technological and economic competence that is to be found in the Emsland region.