The refrigerant crisis is growing – an interview with Hermann Ensink.

Today climate protection is one of the most important and most urgent tasks for the global community. In this context, reducing CO2emissions is the main goal. The resulting stringent statutory requirements are presenting the building services sector with increasingly challenging tasks. Thus the F-Gas Regulation that came into force on 1 January 2018 has caused a real crisis with refrigerants. KAMPMANN HEUTE spoke with Hermann Ensink (Head of Innovation & Technology at Kampmann) about the causes, effects and solutions.

Mr Ensink, do you believe in climate change?

Yes, I am convinced of it. I believe that there is a change in the climate and that the man is responsible for it. Subjectively, I have the feeling that it is no longer as cold in winter and that we are experiencing more and more storms. But objectively the weather records also show rising temperatures.

The so-called "Paris Agreement" agreed the target that global warning should not exceed 2 degrees Celsius – or preferably 1.5 degrees. But serious studies see this target as being almost unattainable now. What is your assessment?

I cannot comment on this as the subject is much too complex for me. We need to put our trust in the specialist scientists. In principle, it is not wrong to assume a rather negative scenario. This would then speed up the global efforts needed to curb global warming. After all, only alarming figures will bring about the respective movement in industry and politics. Especially as all too often people are suspicious that world politics does not have the long-term pressure to act and only acts from legislative term to legislative term. At the same time, the measures needed to significantly reduce CO2 emissions pose major challenges that cannot be solved in the short term. 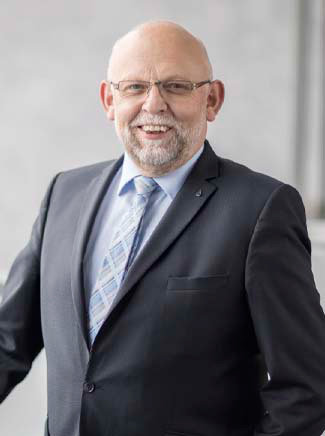 How does the building services industry cope with all the legal requirements relating to climate protection?

It challenges us on many levels. The Building Energy Act has been stopped again for political reasons, but is then supposed to supersede or summarise the Energy Saving Ordinance, the Energy Saving Act and the Renewable Energies Heat Act. We adhere to that obviously. For some time now, we have also been dealing with the EU’s Ecodesign Directive according to which energy-consuming appliances and equipment, including our equipment, simply needs to become more energy-efficient. There are specific stipulations for industry in the directive and in the individual lots. In some cases, it also specifies the tougher measures to be implemented in the coming years. We can adapt to them – even today.

And how are things with the F-Gas Regulation?

This is a topic that actually has a positive impact on us. One value is of central importance in the F-Gas Regulation: the GWP, i.e. Global Warming Potential. A value of "1" corresponds to the global warming potential of CO2. The GWP is used to define the climate hazard of refrigerants. There was once upon a refrigerant with a GWP of over 10,000, but it has long since been prohibited. The F-Gas Regulation will prescribe a host of massive restrictions and bans for the next few years.

The CCI newspaper recently ran the headline concerning the next stage of the F-Gas Regulation due to come into force on 1 January 2018: "The ventilation, air conditioning and cooling sector plunges into a refrigerant crisis". So it is surprising that this did not come about. Has the industry been sleeping?

A little bit. At the same time, things are set to get even more complex.

Could you be a bit more specific!

Then I need to go back a bit. The GWP potential of synthetic refrigerants is still surprisingly high. Take the very commonly used R 410A – which has a GWP of 2,000. Even smaller refrigerant-based system contain up to 20 kg of the refrigerant R 410a. If the installer does not pay attention or he ends up with a leak and the refrigerant escapes, then he has harmed the environment just like 20 houses would in one year using their fossil fuel heating systems. Clearly the legislature wants to preserve the climate. And so the F-Gas Regulation simply prohibits individual substances, while elsewhere the available quantities are extremely regulated. The cut that came into force on 1 January reduces the amount of refrigerants from 93 to 63 percent.

"An air conditioning system operated with CO2 is operated at 120 bar pressure – I would be reluctant to have it near me!"

And the industry was not prepared for that.

Not really, or at least that was my impression. There is also a lack of good alternative refrigerants. In some applications, now CO2is used as a refrigerant. You then have a GWP of 1 - that helps. But an air conditioning system that uses CO2 is operated at 120 bar pressure! I would be reluctant to have it near me! It is a question of time for something to happen: as it were go up in the air.

You said that the F-Gas Regulation has a positive impact on you. To what extent?

We have two approaches to meet the strict requirements. And not just recently but for some time now. We can therefore offer our customers sophisticated products and concepts that are efficient, future-proof and controllable.

We do/t fundamentally say "no" to refrigerants. However, we would prefer to use them in preferably small, at best factory-sealed circuits. That’s why we say ”yes” to refrigerant for cooling, but in a small circuit where the chiller might be on the roof. The distribution of cooling in the building is then water-based. You than have only a few kilogrammes of refrigerant in a small, manageable circuit. It is very different with VRV systems where the refrigerant courses through the entire building in pipes, which is firstly more dangerous and secondly involves much higher demand for refrigerant. The risk of leaks is also significantly greater.

And the second solution?

It is, of course, our Ka2O system in which we generate regenerative cooling with water and without the need for synthetic refrigerants in air handling systems. In principle, sales of equipment offering indirect evaporative cooling are also increasing. Only other manufacturers’ equipment is not as powerful as our Ka2O system – in other words, they don’t get the temperature down as low. The Ka2O system can cool the outside air temperature by up to 20 K, obviously depending on the air humidity. This is sufficient for most applications. Only in very extreme weather conditions does it become tricky, for instance if the weather is very hot and humid. But how often do we have that in a year? And yet, this argument puts some people off. However, that should really be much less of a problem compared to the refrigerant issue with the F-Gas Regulation.

The F-Gas Regulation implies that refrigerants will become extremely scarce and expensive. Where does that come from?

This was obviously not foreseen to this extent and it is easy to speculate about the reasons. The F-Gas Regulation stipulates that all refrigerants with a GWP of over 2,500 will be banned from 2020. This does not means that they can no longer be used. The refrigerant per se may no longer be produced. Recycled, reprocessed material may be used for a while longer. 2022 is the next phase with more drastic restrictions. Then refrigerants will be prohibited that are regarded as acceptable today. But even today there is a major shortage of refrigerants.

"The price structure is completely out of control."

There is a strange side effect to the crisis: refrigerants are becoming scarcer, as are the gas canisters in which they are stored. Experts assume that refrigerants are largely being "hoarded". That would explain the current situation very well. In short: the F-Gas Regulation reduces by law the refrigerant available on the market – drastically since January. And anyone who is storing it is causing even greater scarcity. The refrigerant R 410A, for example, is around four times more expensive than it was in 2016. Others are already ten times the price they were. The price structure is completely out of control.

How do you see it continuing? What trends will there be in 2018?

It will remain tough with refrigerants. The current extreme situation will worsen due to the next phase of the F-Gas Regulation. The availability and the price situation will escalate even further. One reaction that has been visible on the market for some time is that major manufacturers of refrigerant-based air conditioning systems are buying up companies that produce water-based systems. The acquisitions obtained for a very high purchase price suggest that these are purely strategic purchases.

But what does it mean for consumers?

What are the chances of air conditioning being totally refrigerant-free in the future?

Difficult. Most systems will need some refrigerant. But the quantity of refrigerant should be as minimal as possible.

"It is much more efficient to transport cooling with water than with air.”

Do you see other sectors in which energy, and hence CO2 can be saved?

I see great potential in on-demand heating, cooling and, above all, ventilation. An example: Let’s take a normal supermarket and consider the space that is needed for the air ducts when I cool or heat the air with a centralised unit and then supply it to the store. A heating pipe needs only 0.2 percent of the same space as an air duct to transport the same volume. The energy required for a circulation pump to pump water is only around 2 percent of the energy needed to pump air. It is much more efficient to transport cooling with water than with air. And now let's take a look at a different system: here, the air from a central ventilation system with good heat recovery is only pumped when fresh air is actually needed. The cooling or heating is supplied to the decentralised room units on-demand and water-based. Our HYBRID ECO system works in the same way: centralised ventilation, decentralised heating and cooling. This saves a lot of space and energy. As an alternative, you can still rely on evaporative cooling, say our Ka2O, which is completely refrigerant-free.

This is something that the machine tool manufacturer DMG MORI AG (formerly Gildemeister) in Bielefeld does extensively...

Yes, of course it is very pleasing. Several years ago we supplied ventilation equipment with KLIMANAUT technology. And in 2016 further units with Ka2O technology. There are now 13 ventilation units on the roof with regenerative, indirect evaporative cooling. DMG MORI is a company that is very energy-conscious. We recommended the concept together with the consulting engineering office OI, Ottensmeier Ingenieure, Paderborn. The fact that DMG MORI has relied and continues to rely on this technology for so long is proof that it works – and does so very well. We have delivered a total air volume of 260,000 m³/h in Bielefeld.

Apart from the climate protection plan, is there is still large number of laws and standards that have to be adhered to in terms of energy savings. Don’t you lose the overview? You, yourself, sit on a number of standards committees. What is your opinion?

It is true - you lose the overview. As we have already said: the Building Energy Act is supposed to simplify things. But I agree with you, it really has become confusing with standards. It should be possible to simplify one or other and then stipulate specific solutions. Standards are not intended to stifle innovation. A well-crafted standard specifies the required result and makes space for new ideas.